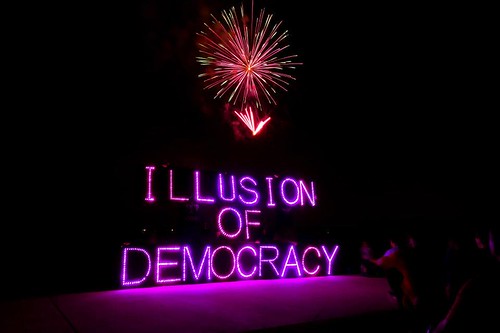 Drawing on the revolutionary spirit of Independence Day, Democracy Movement organizers are calling for a week of creative, artful rebellion against the corrupting influence of money in politics. In the week of July 4th to July 12th activists around the country will stage rebellious actions to showcase a movement ready to overthrow corporate rule and reclaim the promise of government of, by, and for We the People.

“We are fighting for the very self-evident, endowed by creator, unalienable rights celebrated on this anniversary of the Declaration of Independence,” said Bill Moyer, Executive Director of the Backbone Campaign. “Those long ago affirmed rights and principles are incompatible with the corrosive ideas of corporate personhood and the subsequent rights being claimed for corporations, investors, and capital itself. The result is that we are reducing everything and everybody else to commodities, including our planet, our democracy, and life itself. The Rolling Rebellion is calling for nothing less than a non-violent, second American Revolution against oligarchic power and the corporations that that oligarchy hide behind,” concluded Moyer. 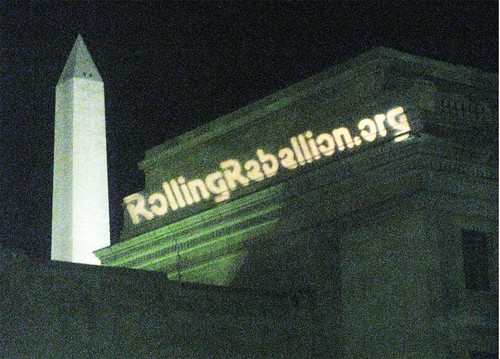 Four years since the Supreme Court’s decision in Citizen’s United brought down the barriers to corporations buying American elections, a strong and broad based movement has emerged to challenge oligarchic rule. And as the influence of big money and corporate power grows, with April’s McCutcheon V. FEC ruling continuing to dismantle limits on campaign spending, the creativity, resolve and ranks of the Democracy Movement are growing as well.

“We know that it will require nothing short of a broad, deep, conscious and educated social movement demanding real democracy to create the world we deserve,” said David Cobb, a spokesperson for the national Move to Amend Coalition. “The Rolling Rebellion is our opportunity to come together and make that happen.”

The “Rolling Rebellion For Real Democracy” plans to use creative tactics like street theater, puppetry and light projection to showcase the breadth and diversity of this movement. From New Hampshire to Seattle activists are planning events to showcase the national movement and advance local campaigns. 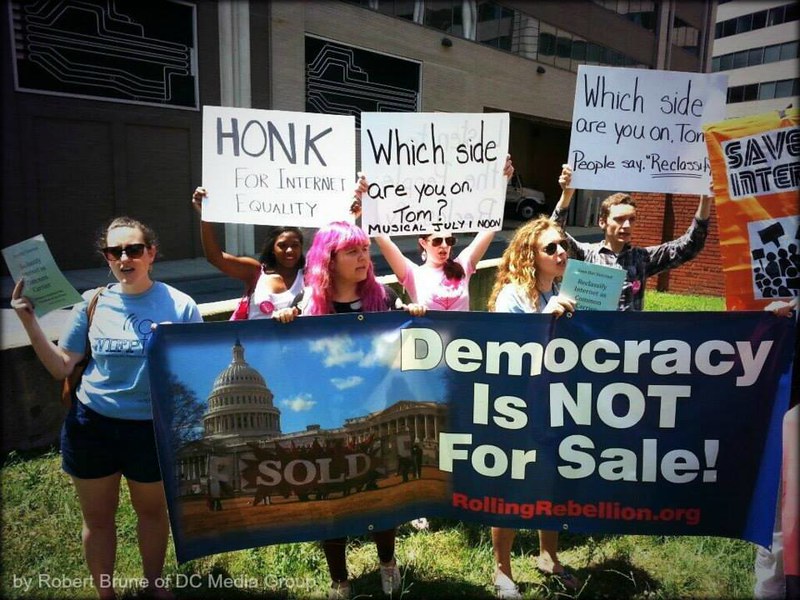 “Our movement is diverse, but we all agree that a crisis of Democracy is at the root of our problems and it’s time to solve it,” said Kevin Zeese, an organizer with Popular Resistance. “Inspired by America’s pre-revolutionary roots we recognize both the need to protest rule of the wealthy and to create real democratic alternatives from the ground up,” added Margaret Flowers, also with Popular Resistance.

In Denver, Colorado activists armed with prop torches and pitchforks will converge on the State Capitol to drive out “Corporate Persons” in a display of popular revolt.

Activists in Lexington Kentucky will march from the Estate of Henry Clay to the Estate of Mary Todd, giving public readings of the Declaration of Independence and Amendments to the U.S. Constitution, and holding a teach-in about efforts to Amend the constitution to declare that Corporations do not have the same rights as people.

Seattle, Washington activists will stage a street performance and procession featuring giant puppets of a “Corporoctopus” and Lady Liberty. Organized by WAmend, Washington’s Move to Amend Chapter, the event will kick off the next phase of the campaign to pass a ballot initiative directing the Washington Congressional Delegation to work towards a constitutional amendment declaring that Corporations do not have the same rights as people.

For full report backs on actions happening around the country visit www.rollingrebellion.orgor contact ahmed@backbonecampaign.org. High quality photos will be available upon request.